From Madison County, Georgia, to Starke, Florida, Twin Pines' leadership has a well-documented history of broken promises, community strife, violations, and environmental damage.
Now they want to complete the trail by creating a mine beside the Okefenokee.
Submit your comments to Georgia EPD at TwinPines.Comment@dnr.ga.gov
Tell them no, and tell them why. 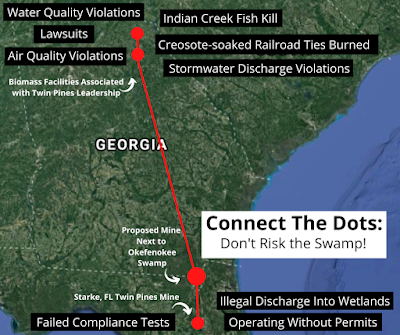 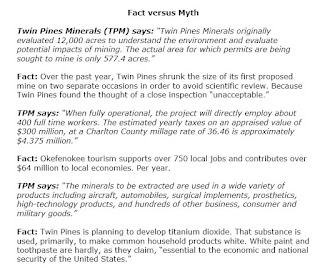 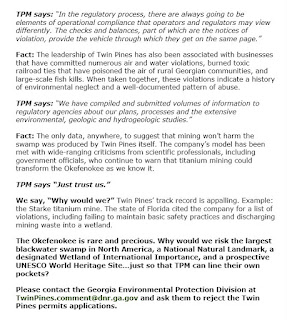 Posted by Alex Kearns at 7:05 AM No comments: MORE THAN 30 GROUPS ORGANIZE TO SAVE OKEFENOKEE SWAMP

GEORGIA (July 14, 2020)  More than 30 national, state, and local organizations have joined forces in the fight to protect the Okefenokee Swamp. The new coalition, known as the Okefenokee Protection Alliance (OPA), recently formed in response to a new and alarming threat to the Okefenokee in the form of proposed heavy mineral sands mining adjacent to the swamp.

In July 2019, Twin Pines Minerals, LLC, submitted a permit application to the U.S. Army Corps of Engineers (Corps) seeking authorization to mine the first phase of what would eventually become a 12,000-acre project abutting the southeast corner of the Okefenokee National Wildlife Refuge.
After the Corps was deluged with letters opposing the project, Twin Pines withdrew that application and submitted a second application to excavate a roughly 900-acre first phase of the mine. The Corps is now weighing whether to approve that second application. Twin Pines must also secure permission from the state of Georgia.
“The new Okefenokee Protection Alliance is the first collaborative effort to have an exclusive focus on the protection of what is arguably our country’s healthiest remaining wetland of significance,” says Christian Hunt, Southeast Program Representative for Defenders of Wildlife. “Everyone came together because of Twin Pines’ permit application, but by design we intend to be active over the long-term and address the present threat that we are dealing with today, as well as future threats that stand to compromise the Okefenokee.”

“Just as we have reached out to folks to call on the Corps, we are reaching out to folks to call on Governor Kemp because it is not just the Corps that has a say,” says Rena Peck, Executive Director of the Georgia River Network. “We want Governor Kemp to stand with his constituents and all the citizens in Georgia who are concerned about the mine and ask the Corps for an Environmental Impact Statement.”

The Okefenokee has a long history of support from Georgia leaders. A similar proposal to mine near the Swamp in the 1990s was stopped when Gov. Zell Miller and others spoke out against it; in the 1970s, W.S. “Bill” Stuckey, Jr. who represented the 8th District of Georgia in Congress, successfully fought to designate portions of the swamp as a National Wilderness Area.

Stuckey, now a resident of the Georgia coast, said recently, “I’m hopeful that Governor Kemp will step in to protect the Okefenokee Wilderness and stop the mine.”

OPA member organizations and federal agencies have expressed concerns that the mine could alter the hydrology of the area and impair the movement and storage of water within the swamp, the St. Marys and Suwannee rivers and the Floridan Aquifer.
This could lead to an increased risk of uncontrollable wildfires and impact access to the swamp for boating, fishing, birding, hunting and photography. Pollution from the mining operation could also impact the health of groundwater and surface water.
The Floridan Aquifer, which lies beneath the swamp, is the water source for all of south Georgia and most of Florida, and feeds many springs in the region, which are already adversely affected by overpumping. Thus, anything that affects the swamp or the aquifer could have far-reaching consequences.
“As the largest blackwater swamp in the United States, the significance of the Okefenokee can not be overstated,” says Alice Keyes, Vice President of Coastal Conservation for One Hundred Miles. “It is recognized through many designations and determinations, but the characteristics that are worthy of the recognitions and that bolster the local economy continue to be threatened.”
Citing the Okefenokee’s status as a Wetland of International Importance and the largest blackwater swamp in the U.S., OPA’s member organizations have rallied citizens around the cause of saving the swamp.

Over the course of two recent public comment periods, the Corps received more than 60,000 comments, the vast majority of which urged the Corps to deny a permit to Twin Pines for the controversial and potentially destructive mine.

“One voice or even a dozen can be drowned out by the interests of those who seek only financial gain – but OPA represents the voices of millions.” says Alex Kearns, Chair of the St. Marys EarthKeepers.

Hanging in the balance is a unique ecosystem of incomparable beauty. With 600,000 annual visits, people from all fifty states boat, bird, fish, and hunt within the legendary swamp that spans across more than 400,000 acres, much of which is protected as a federal wilderness area.

“It's a special place, but in the U.S. Fish and Wildlife Service it stands out among refuges,” says Jon Andrew, Florida Refuge Liason for the National Wildlife Refuge Association and former Regional Chief of Refuges for the Southeast Region for the U.S. Fish and Wildlife Service. “The Okefenokee is the largest National Wildlife Refuge east of the Mississippi. You have to go to the Southwest or Alaska to find refuges of comparable size, and it presents the opportunity to manage an ecosystem, which is rare anywhere, but especially rare in the Eastern U.S.”

Tourism associated with the swamp supports more than 700 local jobs in the four rural counties surrounding the swamp and generates $64.7 million in local economic output annually.

In addition, the Okefenokee feeds both the St. Marys and Suwannee Rivers in Georgia and Florida, both of which are rich in outdoor recreation opportunities in their own right and provide habitat for federally protected fish and other rare wildlife.

“The presence of a powerful and united coalition such as OPA is essential,” says Kearns. “It allows local organizations and citizens a megaphone, a way to be heard. Ours are the lives that will be most directly impacted because our health and our economy are fundamentally tied to the well-being of the Okefenokee.”

OPA’s mission is to “protect the Okefenokee National Wildlife Refuge from any activities that could jeopardize the integrity of the swamp now and in the future so that the wildlife that inhabits it and the people who recreate and work in the swamp can thrive.”  For more information, please visit: www.protectokefenokee.org

Members of OPA include:

Posted by Alex Kearns at 6:52 AM No comments:

The People Have Spoken


Thank you! You’ve responded to the threat to the Okefenokee National Wildlife Refuge in astounding numbers. Well over 60,000 people submitted comments regarding Twin Pines Minerals’ applications to mine Trail Ridge (the geological “dam” of the Swamp) in the search for titanium.
- Twin Pines’ March permit application alone (the second one for a smaller area which, we believe, was nothing more than a bid to evade an Environmental Impact Statement) drew 44,000 comments from 50 U.S. states, 4 U.S. territories, and over 30 countries.
- In response to Twin Pines’ March permit application, 34 national, state, regional and local conservation organizations signed a joint comment letter to the United States Army Corps of Engineers (USACE), outlining their deep concerns about Twin Pines’ proposed project.
- On May 13th, the USACE held a virtual public meeting about the proposed project. The video-conference lines were filled to capacity.
The entire nation and much of the world has spoken: protect the Okefenokee National Wildlife Refuge, and the St. Marys and Suwannee Rivers.

Posted by Alex Kearns at 5:53 AM No comments:


With your help, we’ve come so far. Please take this next step. And remember...it doesn't matter in which state or country you live: the Okefenokee is one of the world's largest naturally-driven freshwater ecosystems and the fight to protect this rare jewel is a global effort.

On Wednesday, May 13, from 2- 5pm, the United States Army Corps of Engineers (USACE) will be holding an online Public Hearing about the proposed titanium mine on the doorstep of the Okefenokee National Wildlife Refuge. The Okefenokee is one of America’s greatest wetlands, a critical habitat for rare and imperiled plants and animals, and the headwaters for two essential river systems.

Twin Pines Minerals, LLC, has now submitted two applications and yet the company has consistently failed to prove that they will cause no harm to the Okefenokee, the St. Marys River, or the Suwannee River. In fact, federal and state agencies as well as more than 20 national, regional, state, and local conservation groups have voiced concern about the proposed mine: concern that is supported by members of the scientific community. The common consensus among these experts is that the Twin Pines project presents a clear threat to this rare and fragile environmental treasure.

It is imperative that the public has a voice in this crucial matter. Over 30,000 of you submitted written comments and now we ask you to take this next quick step.

Please join the online hearing for as much time as you can spare.
The meeting will be held using the WebEx platform.
In order to attend the Virtual Public Meeting you must RSVP by emailing
CESAS-SpecialProjects@usace.army.mil
Subject: “RSVP for 13 MAY Public Meeting TPM”
Make sure that you include your full name, email address, and contact phone number with area code.
Before the meeting, you will receive the meeting link, instructions, and security code. Just click the link and follow the prompts.

You don’t have to participate in the entire 2- 5pm meeting; we understand that that’s impossible for many people. Just stay long enough to make yourself heard by typing your comment and/or question in the chat feature and asking the USACE to either deny the permit application for this controversial project or, at the very least, require a comprehensive Environmental Impact Statement.

All participant lines will be muted in order to maintain audio quality. Moderators will direct questions to the appropriate person during the question and answer session.

It is essential that we take action now in order to save the Okefenokee National Wildlife Refuge and the rivers that depend on it. Please…speak up on May 13th.

Posted by Alex Kearns at 8:26 AM No comments: